The Voice of God 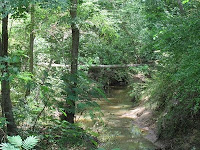 This morning Ginger and I went on our walk. A beautiful cool morning after the evening rain last night. The plants were happy, having gotten their fill of water, and were perked up. The squirrels were happy, chasing one another, eating nuts, having a wonderful Saturday morning. And the birds. The birds were flying around and they were happy as well. It was then that I heard the distinct sound of a cardinal making it's call. Whether it was for a mate, or looking for a mate, or companions, I've learned that sound in my quest to take pictures of what I remember to be my Mom's favorite bird.

In the same respect, this past week, I've found my intimacy back with God. As we were walking I realized that I could recognize the voice of the cardinal. Because of actively seeking out it's voice, watching the bird, it's behavior, I even learned where the bird was at. I learned the places it would most frequent. Applying those same principles to this week, I actively saught out God in His Word, spent time with Him, meditated and just listened. I could recognize His voice from all the other voices I heard. You know, worldly voices. When you work in ministry you get busy. There is much to do, and you pour out your heart and soul as you help people. But you have to fill up. You have to keep seeking God in that alone time, and with your spouse. If you don't you get empty, and you get tired, and you begin to wonder if it's worth it. You begin to want things that you don't have I mean after all, you deserve them right? You've been working hard all this time, it's my time now right? Worldly voices. Me me me. Self Self Self. Too many voices. So I actively began a journey to hear the voice of God. And I brought Ginger in on my quest as well, we are, after all, one with each other and Him. And just like the cardinal I could hear the voice again. At first it was distant, I was still half listening to the other voices. But as I pressed in, persevered, those went away and God began speaking. He never stopped speaking I should say, I just wasn't listening.

Think of it this way. You've gone for a walk before. How often have you walked and you don't notice anything but say, the cars driving on the road, or people walk by, and you may hear the birds but don't pay attention. Now then, go on a walk and actively listen and watch. It becomes a new experience. The cares of the world go away as your actively engaged in listening and watching.

This week has been one of growing in the Lord, learning to trust in Him again, and having my faith renewed. And I've talked to other believers in my sphere that have been going through the same thing. I feel as if I've been fed, watered and, well, filled back up. God is speaking to us, all the time, the question is are we listening?
Email Post