So sometimes I can't wait to write my blog.  Then there are other times where it can be difficult.  This is one of those times.  But I have had time to process my thoughts so that I can write what I need.

So when we left the blog last week, we had lots to celebrate.  My article was published, Ginger's sister and fam was coming into town, and that Sunday was her first day not taking Xanax daily, which was a huge deal.  Sunday night we were watching TV and then at 8:45 everything changed.

Ginger let out a scream and then went into a seizure.  She shook, her head arch backed like she was being electrocuted and then went limp.  Her eyes in the back of her head, her lips a pinkish blue.  I have been around people who have seized before, so I am not unfamiliar with how to handle it.  She was breathing and her eyes went back to normal, but there was no one there.  It is a terrifying feeling to see someone who you love with all your being not recognize you and not be able to communicate with you.

I called her parents first to see if she had ever seized before (she has been bipolar since 1999).  I knew when I called 911 that would be the first question (it was).  At this point she sits up and walks from the living room to the bedroom and reaches for her Jesus Calling book.  Again, not responding to me, I take the book, and she lays down.  By this time I am on the phone with 911.  A huge shout out to Tyler's Fire Department who were here within 3 minutes.  They came up and soon after the paramedics came.  I was able to answer all their questions, I had her medicine, her medical history, which helped to make things go quicker.  She began responding at this point and the firemen and paramedics were able to tell me her brain was resetting and that could take 5 minutes to 1 hour.  Her parents (and sister who had just got into town) were going to meet me at the hospital.  When we got to the hospital, Ginger was back to herself.  The light was back, she knew who I was, and it was about helping her.  A CAT scan and blood work were done, but nothing was ever really concrete about why she had a seizure.  I figured it had something to do with her medicine and we resolved to figure that out first thing the next day.  There was a funny side note.  She kept calling me her cute husband.  She got back from the cat scan asking where her cute husband was.  It was a needed laugh for everyone.  We got home and she was still having problems with her eyes fluttering and mouth moving.  She slept, I watched her most of the night.

Monday we were to have an appointment with her (and my) primary doctor.  I began letting people know what was going on, asking for prayer, and I went and woke her up.  She wanted to sleep a little longer so I let her.  I woke her up and she sat up and we were talking.  I was about to call her psych doctor to let him know what was going on.  And Ginger seized again right before my eyes.  This was a mild one compared to the other.  At this point I have her parents on my phone and her doctor on the other phone.  And his first words were, Paul, this is Xanax withdraw.  We thought we had gone slow enough but the last little amount was accelerated because she was having anxiety attacks and he suspected the xanax was causing that, so told us an accelerated plan.  She needs to get some into her system he said.  By then Ginger was coming too so I had her sit up (she did) asked if she could take these pills (she could and did), and then laid down.  Psych doctor told me to call him if she had another seizure (she ended up calling him later to update him).  Talked to the primary doctor's nurse so she could get in to see him and get a neourological appointment.

By Monday afternoon I was physically and emotionally drained.  I had put my emotions in a special place so I could concentrate on taking care of Ginger.  Talking to my parents, even they could hear how exhausted I was.  So her family came and got her to watch her so I could get some rest.  I got a little bit.  I have gotten more as the week has gone on and she has had no more seizures.

So Ginger has been doing much better.  No real big anxiety attacks to speak of.  Though there have been a lot of questions to try to fill in the blanks.  In fact, it seems that her brain has been reset.  Of course she has been covered in lots of prayer.  And for right now the 3 .25mg pills, 1 every five hours, has made all the difference in the world and will not change for the time being.  She will have an EEG and MRI at the end of the month.  She will not be driving for a bit (it is actually the law) just to make sure.   We had a neurology appointment on Wednesday that was absolutely wonderful.

Having my wife back has been wonderful.  I have had to deal with the trauma that I experienced as well.  I am finally eating normal again.  I had no appetite and every time we sat on the couch I just wanted to make sure Ginger was okay.  I am sleeping better now with each day she puts under her belt.  Her family being here has been a real blessing because her Mom would come over to be with her while I went to work.  It is amazing I got anything at work done.  My mind was playing those seizures over in my head and Ginger was not far from my mind.

Of course the big test, for me, the big hurdle, will be tonight.  Same show, same couch.  We have walked Sophie together and she has been cleared to do most of what she use to do (except drive).  Thank you for all the prayers from family and friends.  Thank you for your support and encouragement.  If I did not contact you I probably did not have your number and I did not put it on Facebook till now.

Let me reiterate, Ginger is much better and more herself each day.  Her brain has reset, and she has not had anxiety attacks.  She is enjoying life, she says, being free right now from them.  God is good.

So this week's photo.   No photo editing, on purpose.  This is what is important to me, my family, our families.  That is what is important.  Looking into a loved one's eyes and not seeing them there is perhaps one of the most terrifying experiences I have ever experienced (and I have friends who have loved one's who seize a lot).  So this photo shows life and love and I thank God each day for them. 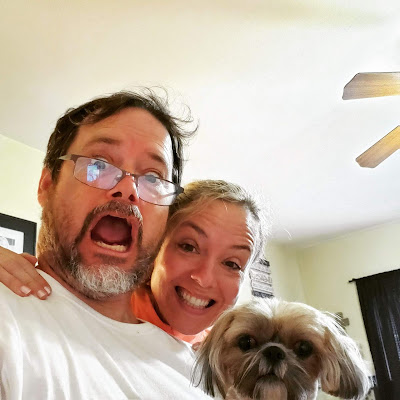