Week 32: Snacks while Ginger on Vacation

So as I told you last week, after playing around with my laptop and desktop I knew i neededget a new pc.  So I began researching.  And I mean hardcore.  I have the capability of building my own pc and that was the path I originally sought.  But as I narrowed down my choices, there was one computer that had the specs I wanted, the HP Envy Phoenix. I even did some work on whether I could build it cheaper.  So being in Tyler, I thought, Best Buy right?  Nope.  Could not get it until like August 13th.  I have so like stopped going to Best Buy.  Why have a brick and mortar and you can't even get what you want?  So I looked online and sure enough Fry's Electronics in Dallas had the computer.  Since  Ginger is on vacation in Georgia, I thought road trip!  Sure enough I hoped in the car and drove out to get my computer.  I had my "fun money", money I had earned outside of my regular job, so I was ready to get a new pc!    So I got home, hooked it up, and a loud noise.  Open it up and a wire was hitting the fan.  Easy fix.  And then the monitor's were not coming on.  Well,  so you know there is a difference between analog and hdmi!  Press of a button and the screen comes to life!  Anyway, this machine is a monster!  With an SSD hard drive it boots up in mere seconds!  Cudo's to Trend Micro for making putting anti virus on a computer a breeze and taking off the trial offered.  I am soooooo happy with this computer! I know, where is the photo.  Well, Ginger, baby, here is what I am eating while you are gone: 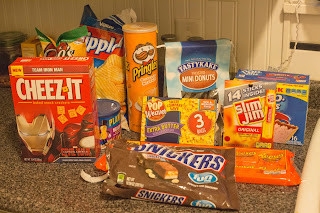 I promise it will be all gone when you get home!  Yep, snickers have been opened!

I should say that Ginger encouraged me to get a new computer.  I love this about her.  She knows, and I means knows, when I really need something.  She knows I research, I even agonize over the decision to the point I lose sleep.  I do not make it without much thought or prayer.  I love how she supports me!  God picked Ginger out of billions of people in the world, and for that I will be forever grateful.....