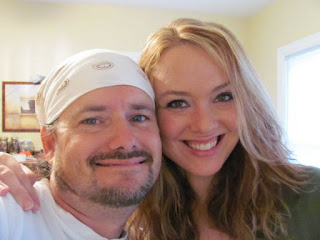 Who knew that after the Restoration Projects blog that we were about to enter a storm.  We'd just had one with my experience with a kidney stone, not the funnest trip in the world.  But the storm clouds were brewing.  Ginger has never been shy about her bipolar, always wanting to help others who struggle as she does.  For those who don't know, structure is vitally important for someone with bipolar.  As well, change can be a trigger into bipolar episodes.  Ginger does fairly well with changes as long as they come in small doses.  At work, however, things were turning rather chaotic.  They were going to move into a new building and Ginger has two new tasks that she was going to have to learn.  I'll never forget that call after the meeting about the new changes and Ginger was, in a word, terrified.  An hour and 45 minutes of a blitzkrieg of information on how to do the new tasks, notes taken, Ginger did not have a full handle on it and she was scared she wouldn't learn it.  Three new changes, rather big, and it brought about the depressive side of bipolar.  Change can be scary, especially when you don't know what to expect.  Add with that the move in which the structure of every day work life was going to be changed, as Ginger said, it was a level 6 hurricane.  It would have been a tornado, but it stayed awhile.


The fact is, I'd seen this before.  Ginger doesn't think it was to this intensity, but the last time we were dealing with something to this magnitude was when Ginger was learning a new task at work, EOB's was the name of the task, and it was hard for her.  But as she learned that task she learned to love it and the intensity of the change went away.  This was different only in the sense that there were multiple changes.  To add to the intensity, it was in the future, the new tasks wouldn't be done for a week and a half and in that time the move was taking place.  The waiting, for Ginger, was almost unbearable.  The worst possible scenario's were imagined which only added to the intensity.

So how did we manage through the storm.  Yes, I said we because Ginger was not going to go through this alone.  I've been an avid student of Ginger's bipolar.  It is, in a sense, predictable for me.  I can look at Ginger, or sense in her voice when the chemicals in her brain are awry.  There are certain trigger words or phrases that send the red flags up that I'm dealing with the bipolar.  And in a sense, that is what Ginger needed, someone on the outside looking in who could tell her what was happening.  It took the guess work out of why it was happening at least, though she would still have to ride the storm.

The first thing that began to help was a medication increase.  Ginger called her doctor and we went up on her mood stabilizer (she has since gone back to her normal level).  She saw an immediate relief when this happened, though mornings were a bit more groggier.  The second thing was getting Ginger to talk about how she was feeling.  Regardless of how, shall we say unreasonable, it may have sounded, she was still feeling it.  It also would help me to gauge where she was at.  I prayed alot.  I prayed over Ginger, I prayed for wisdom, because I knew that alone I had no chance in this storm.  And then I became the voice of reason.  Trust me this was hard at times.  There were many calls, or talks, where as the tasks were looming in the future that Ginger wanted to just quit.  There were elaborate plans of hey I could do this, or that, and yet I'd seen this before and knew once we got to the task that the intensity would wane.  Try convincing someone of bipolar that, it is an ominous task.  Ginger would try to convince me in the hope I would say, do it, quit.  But I didn't and in those times when her perception changed, she knew, deep in her heart, that it wasn't the solution.  There were times Ginger thought she might have to be commited when it was at it's highest intensity, and then came the feelings of why God would allow this to happen.  Remember, Ginger's bipolar manifests in hyperspirituality, and so the deeper the bipolar goes the more spiritual it becomes.  And yet, as the intensity would lift, Ginger would listen to God as He spoke through me and would end up praising God.

This is a silent illness.  You wouldn't know that at work Ginger is crumbling inside.  As Ginger says no one had a clue of what she was going through.  There were other changes that we implemented as well.  Ginger stepped down from leadership at Celebrate Recovery, relieving herself from her responsiblities so that she would go to small group and concentrate on her recovery.   We had thought about taking a sabbitcal but one issue that came up during the storm was Ginger's codependency.  Her codependency to her boss and perfectionistic issues were making themselves very clear.  But once she realized she was powerless, well a sense of relief flooded her.   Plus, one of my best friends who had been struggling began coming to CR and so I became a support not only for him but for Ginger as well.  I'd even talked to my parents about Ginger and I stepping back, little realizing the above would come up in the next week and answer the prayer I had to God about what to do.  Funny, God answers prayer in completely different ways sometimes.  My parents, Ginger's parents and family, and our closest friends all prayed and were supportive during this time.  A support group was vital.  Did the storm get taken away, no, did we make it through it, absolutely.  There were honest facebook posts where Ginger would state how she was doing, and I'd update are friends from facebook.  And as much as I love CR I made it clear to leadership and Ginger that if it was a choice between going on Monday night one night or being with my wife, I'd choose her.  Just knowing that she had that option of having me if she needed me was a help to.

During this time I did deal with temptation.  At the height of the tempest, I'd be cleaning an apartment out and find half full bottles of alcohol.  Though fleeting, that thought would come in that I could take the edge off.  What did I do?  First, I'd pour it out.  Can't be tempted by it if it's not there.  The second is I'd talk about it, to Ginger and my closest friends.  There is strength in a multitude of counsel (Prov. 11:14).  If ever my mind wondered to stopping by a store I'd text Ginger to pray for me as I drove home.  Just because I have over 9 years of sobriety doesn't mean I'm cured, or that I can go back.  I can't.  As well, I'd go to CR and talk to the newcomers (I do the newcomer class) and that was a good thing as I give my mini testimony and remember why I'm in recovery in the first place.  I use to think that I couldn't show signs of weakness.  That led me into relapse time and again and kept my mouth shut.  Now, hey, if I'm weak my God, my wonderful God is strong and will help me.  And sometimes, well, you just have to say hey, I'm struggling can I talk to you a minute.  Does a wonder of good, let me tell you.  And as Ginger got better, I had less temptation.  It is always good to have a relapse prevention action plan and mine worked.  When you deny you have a problem, or worse, think your cured, well that can only signal trouble.

When Ginger would come to me with her bipolar depression the first thing I'd say is, take some medicine, then we'd talk.  I had a plan, talk for 45 minutes to an hour and the meds would kick in.  Sometimes I'd give her a back massage and she'd go right to sleep.  Actually, it went a little like this:

When she woke up, with the chemicals in her brain not racing around but settled she'd feel much better.  Sometimes we'd have to do this a couple of nights in a row, but that is where being attentive to the bipolar and what is going on is helpful.

As Ginger began the new tasks, the intensity waned.  The first was no big deal as she found out and the second is getting better.  The move has been made and though there was some adjustment, Ginger is dealing with that adjustment well.  This past week has been so very much better, a few anxiety attacks but as Ginger says those are cake compared to what she just went through.  People with bipolar can lead very successful lives and Ginger is an example of that.  Because of Ginger's memory she doesn't remember her attacks or episodes from the past, only that this one is the worst.  Again, that is where I come in.  I learn from each one and use that knowledge to help in the next storm.  Ginger says she is so thankful she has me, quite honestly I'm so thankful I have her.  This love I have for her is amazing and through storms and sunny skies I love her.  She is an amazing woman of God and I'm so proud to call her my wife, my soulmate, my one and only.  She is quite honestly the most beautiful girl in the world to me and I'm proud to be able to storm ride with her....